1 a band of colors, as seen in a rainbow, produced by separation of the components of light by their differentdegrees of refraction according to wavelength.
• ( the spectrum) the entire range of wavelengths of electromagnetic radiation.
• an image or distribution of components of any electromagnetic radiation arranged in a progressive series according to wavelength.
• a similar image or distribution of components of sound, particles, etc., arranged according to such characteristics as frequency, charge, and energy.
2 used to classify something, or suggest that it can be classified, in terms of its position on a scale between two extreme or opposite points : the left or the right of the political spectrum.
• a wide range : self-help books are covering a broader and broader spectrum.
ORIGIN early 17th cent. (in the sense [specter] ): from Latin, literally ‘image, apparition,’ from specere ‘to look.’

spectra is a series of large scale installations employing intense white light as a sculptural material. The installations are designed in response to specific gallery spaces or public sites selected by the artist. White light is one of the purest forms of transformation from electricity. We see a pure state of energy. Through these installations visitor's witness how this pure transformation alters the environment itself as well as oneself.

White light includes the full colour spectrum. With the light-installation, the visitor receives colour information into their eyes instantly and so intensely that they are unable to see anything, just like in darkness. The installation therefore becomes almost invisible. Consequently, the art works provoke a feeling of something indescribable, something sublime and unearthly, something unforgettable. 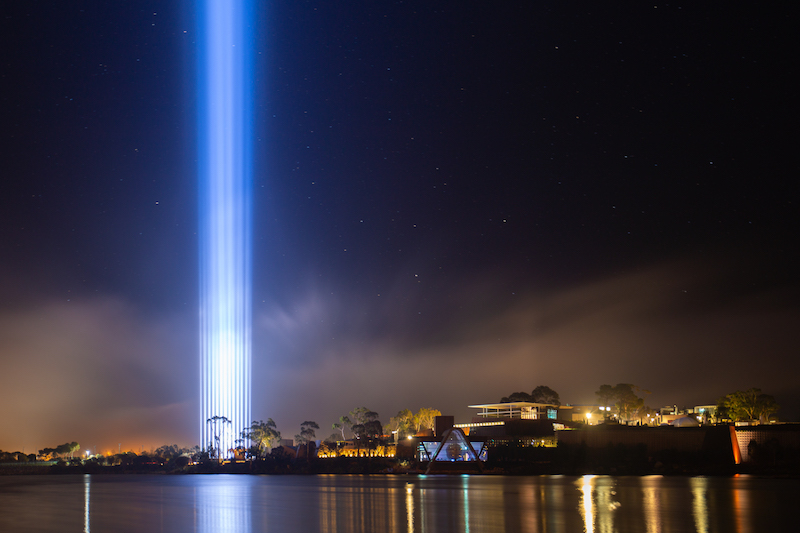 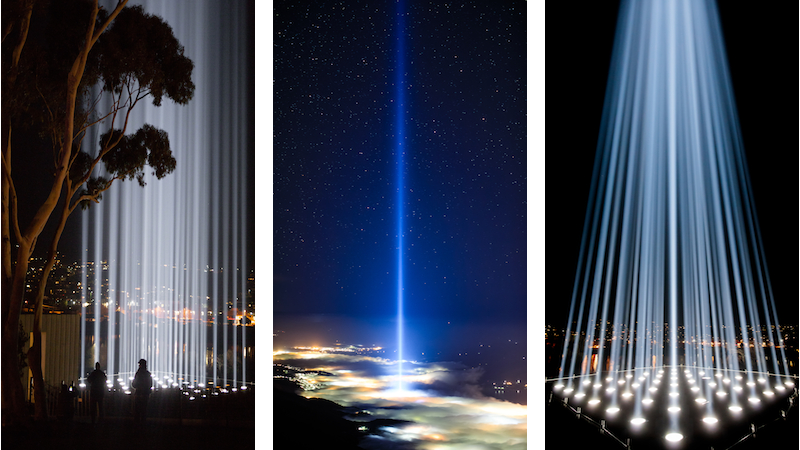 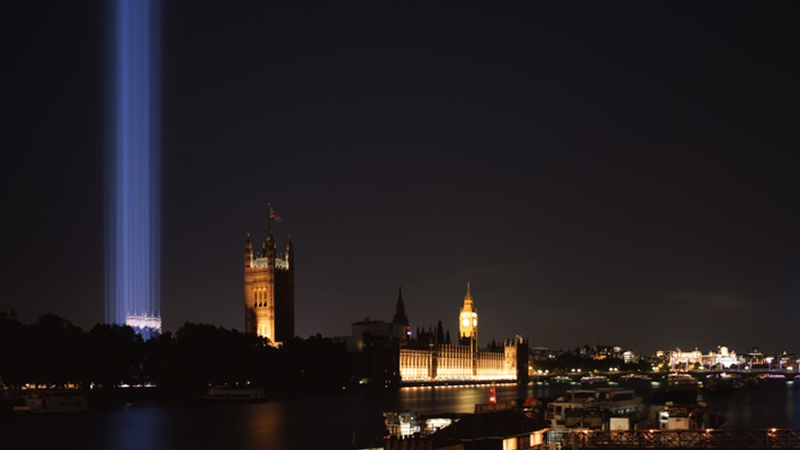 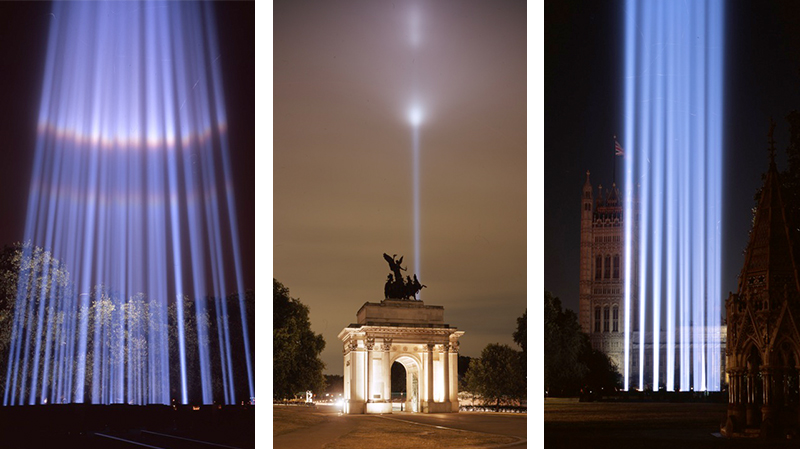 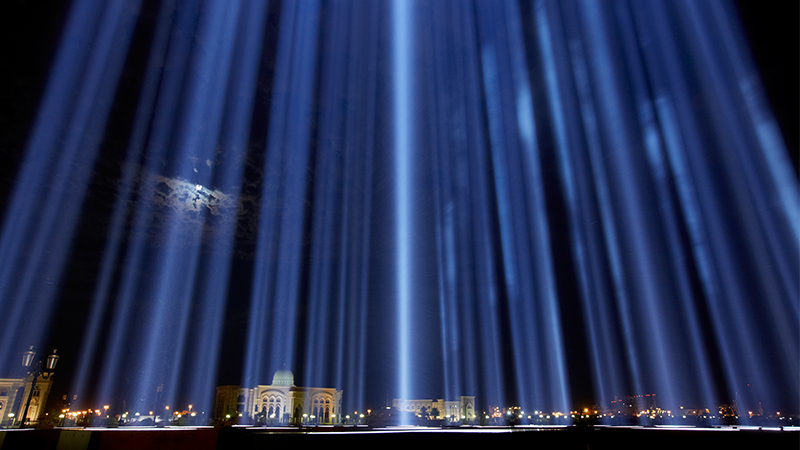 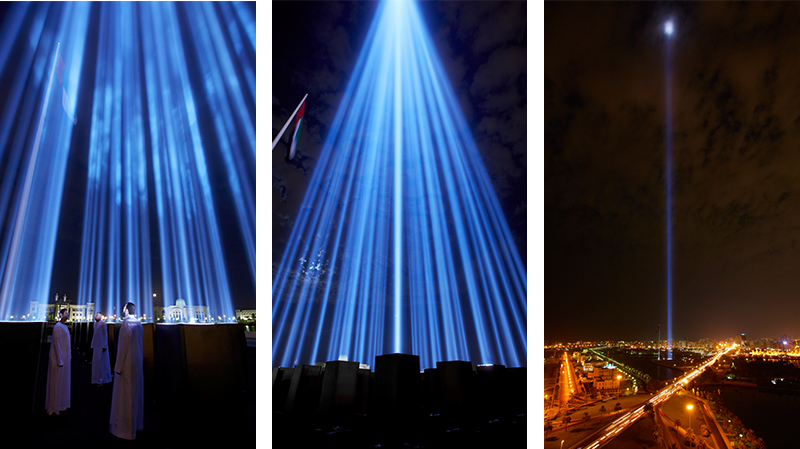 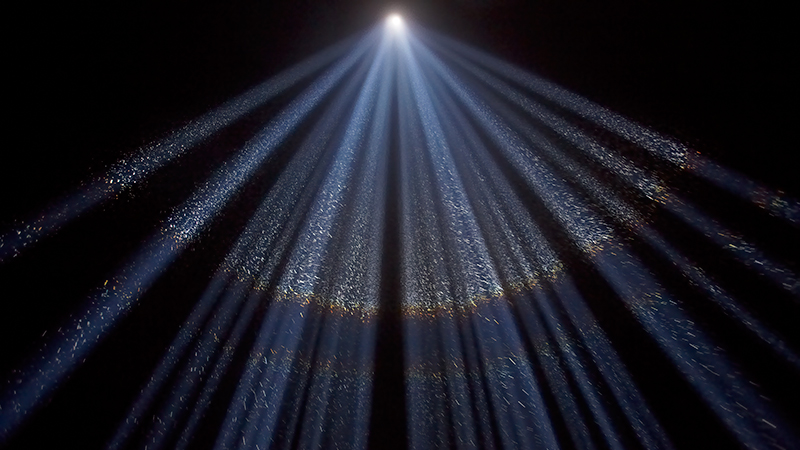 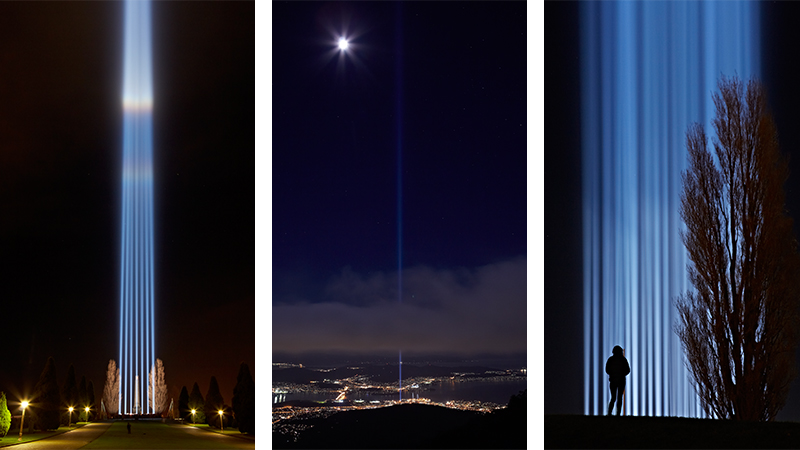 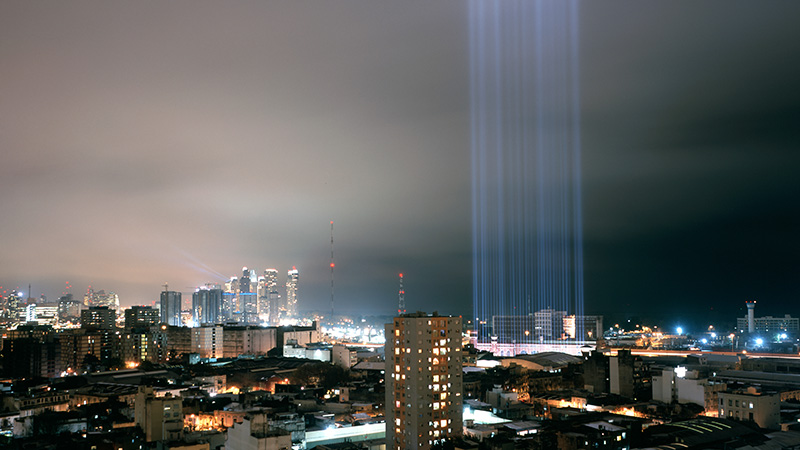 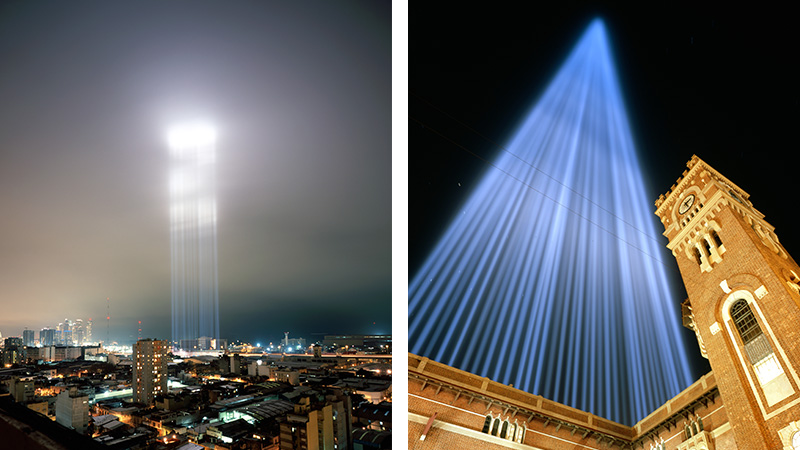 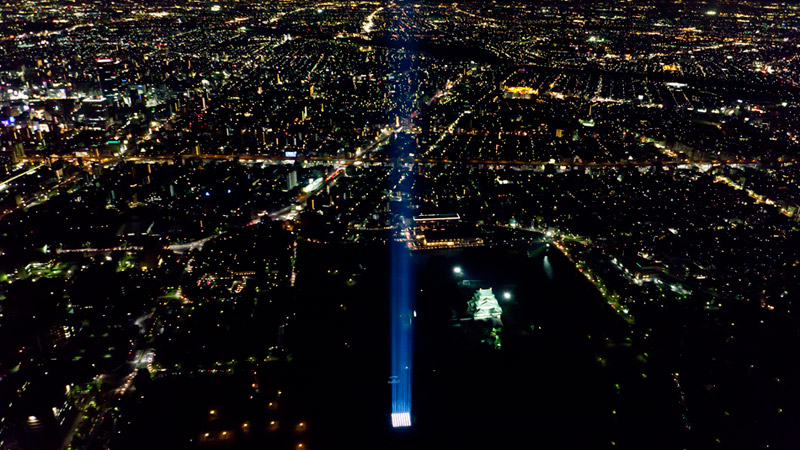 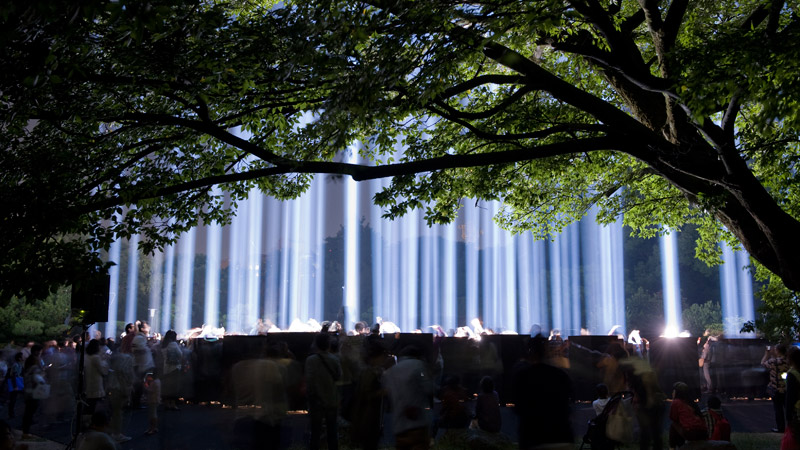 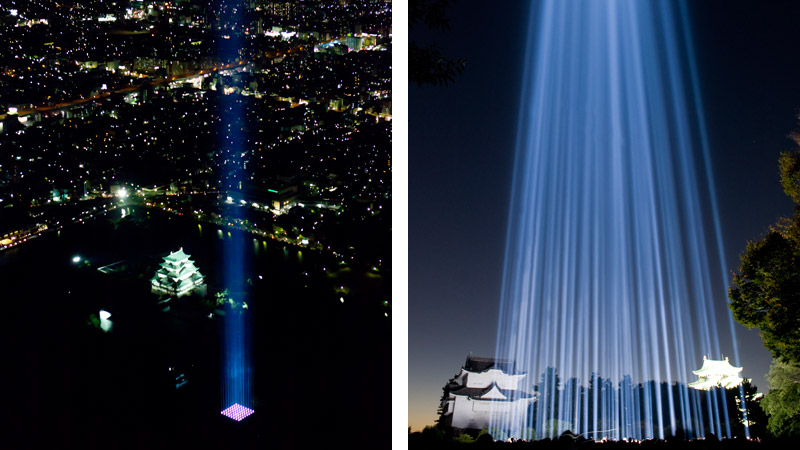 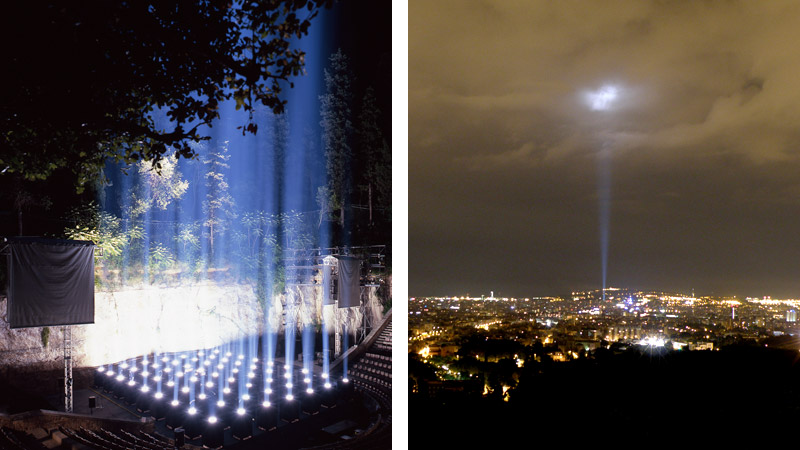 Sixty-four powerful lighting devices are projected vertically up into the sky. The sculpture of light can be seen from all points in the city, its illumination changing constantly as clouds pass by. As visitors approach, they will receive colour information into their eyes instantly and due to the intense brightness, the installation becomes almost invisible.

At the base of the sculpture, visitors can walk through the grid of light, which is filled with sinewaves. These waves are ultra-pure, forming invisible sound patterns whose source is indecipherable by the ear. The emitted sinewaves interfere with one another as visitors walk through the grid, causing subtle oscillations around the ears of each individual. A musical score is thus created for each person as they move through the space, creating an entirely unique and personal experience for each visitor. 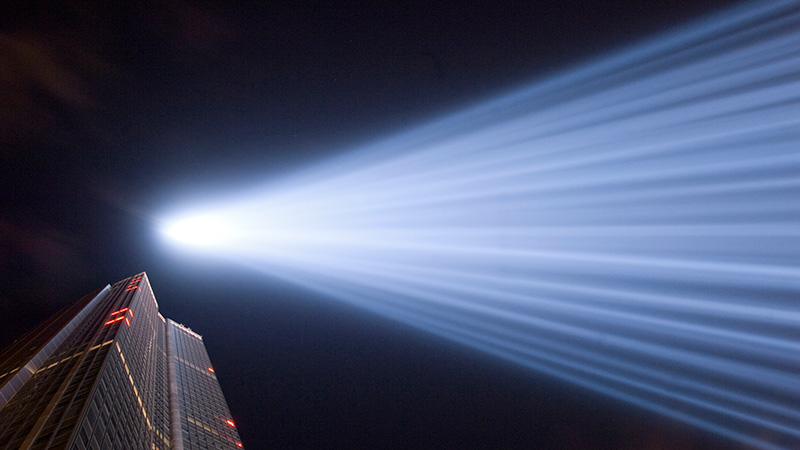 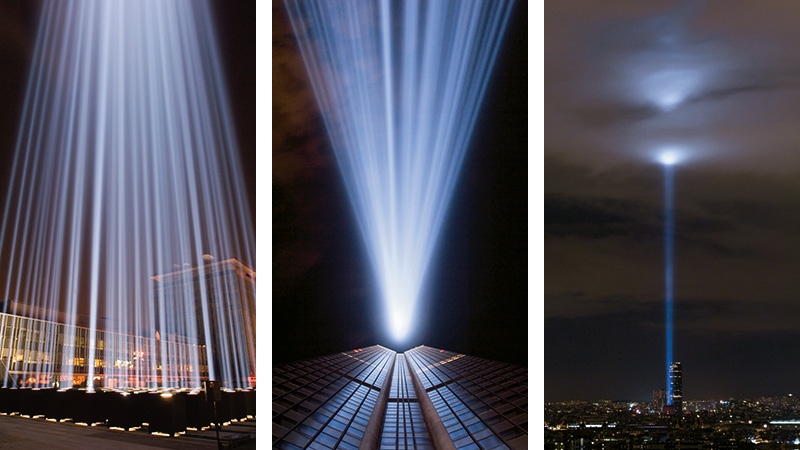 The Paris night sky is illuminated with blinding white light beamed vertically from scores of highly powered architectural lamps; spectra [paris] was commissioned for Nuit Blanche, the city’s annual white night contemporary arts festival. Situated on a plaza next to the tallest skyscraper in France, the lighting is accompanied by a sound composition. As visitors move through the field of light they each experience a unique symphony of ultra pure sine sound waves. 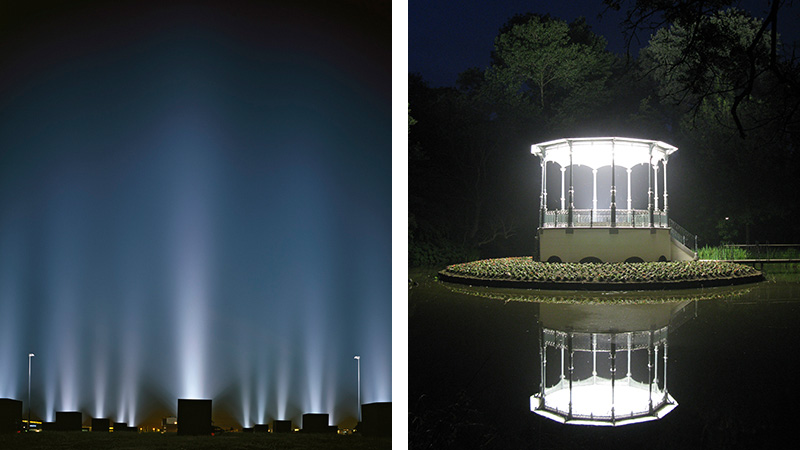 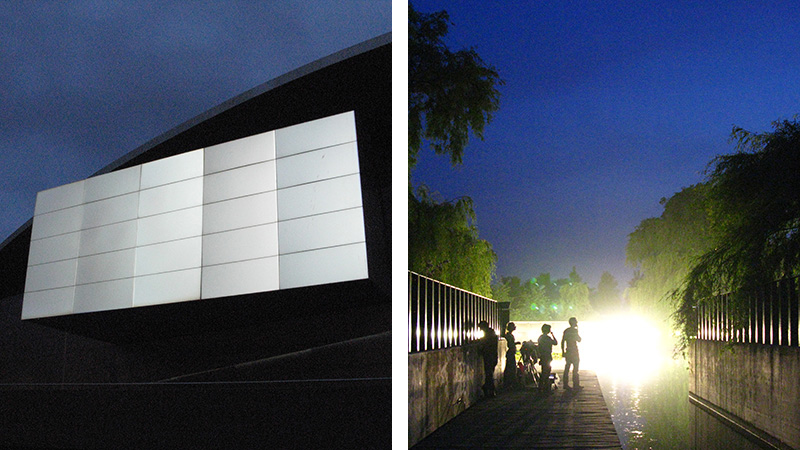 spectra [amsterdam] was commissioned for Dream Amsterdam 2008; the first project for a public space and first large-scale work pushing the creative possibilities of light to its utmost extremes. In this work selected architectural features in industrial, civic and open public spaces emanate blinding white light for several hours every evening, in an unearthly, unforgettable experience. 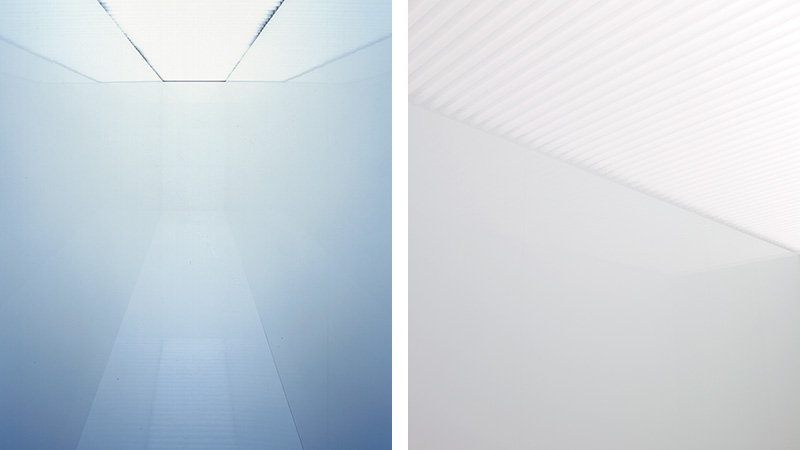 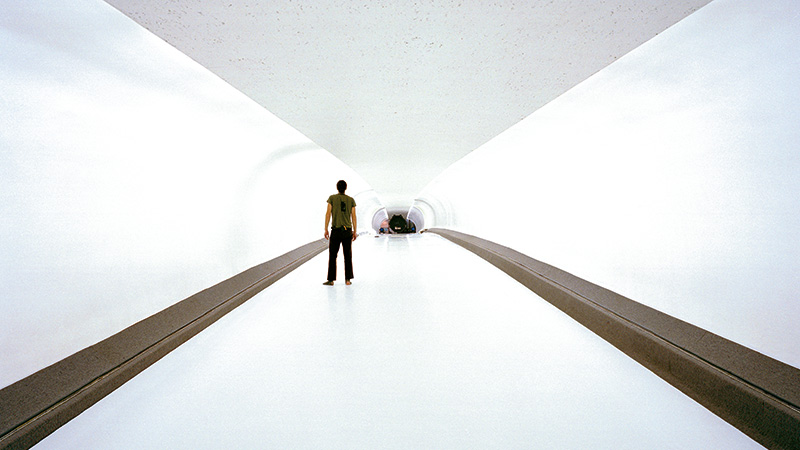 spectra [for Terminal 5, JFK] was commissioned for the luminal tunnel of Eero Saarinen's TWA Terminal at JFK International Airport as part of Terminal 5, an exhibition curated by Rachel K. Ward. With it's plunging vanishing point and soaring roofline, Saarinen's theatrical passage embodied, if not created, Utopian ideals of transcendence and transportation in travel. The installation offers visitors a special phenomenon. It is nearly invisible due to its intense brightness and inaudible due to its ultra-frequencies. Visitors can barely recognise the dimensions of the space, as if they were blind in a whiteout state. As they pass through the corridor, subtle oscillation patterns occur around their ears, caused by their own movements interfering with the sounds. The sound is subtle and minimal, yet the experience of the sound in the installation is active and dynamic. It is therefore only through the public's physical engagement in the sound space that the real character of the work can be perceived. 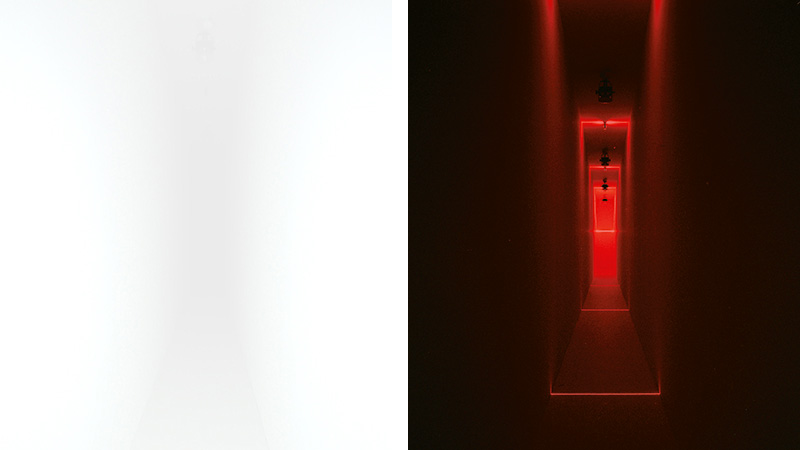 This installation relies on the intersection of sound and architecture as well as exploring an interest in phenomena - be they light, tone or sound - and how they materialise and manifest themselves in the world. The piece is built as a narrow, ceiling-covered corridor, allowing only one visitor to enter at a time. In the space, red laser lights mark out the architectural construction of the otherwise darkened corridor and divide it into sections. Along the length of the space, speakers and strobe lights are mounted on the ceiling. The flashing strobe lights and high frequency sounds are synchronised and continuously change the experience of the space. Aiming at purity and simplicity in the sound, high frequency sine waves are deployed, only to subject them to an exploration of how pure tone and sound are distorted by the resonance and reflective qualities of a given architectural setting and the presence and movement of the public. Visitors can hardly recognise the dimensions of the space, which is almost invisible due to its intense darkness/brightness and inaudible due to its ultra-frequencies. However, as they pass through the corridor, subtle oscillation patterns occur around their ears, caused by their own movements interfering with the sounds. The sound itself may be subtle and minimal, but the experience of the sound in the installation is active and dynamic. It is only through the public's physical engagement in the sound space that the real character of the work can be perceived. 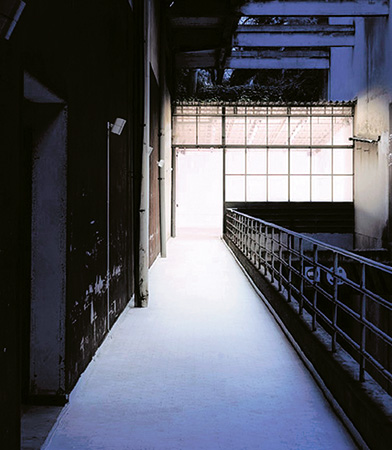